Hi Gang:
Well, it’s a good thing I took a few days off at the end of April to relax and stare at the ocean for awhile. From the looks of things, I might not get a whole lot more rest for the next six weeks or so. Things are poppin’ all around me!
UMG Records sent out a press release last week detailing the exciting news about my rejoining the label that I called home for 23-years and the initial projects that are on the horizon. First, is a new album called, “As Far As I Can See,” which will be released on  June 10th. It will contain 14 of my biggest hits from across the years  plus two duets with Dolly Parton. Two days after the announcement, the record was already the #1 most pre-ordered record from Amazon!!  You’d be hard pressed to get the smile off my face right now!!
One of the two Dolly duets is the original demo recording of “If It’s All The Same To You,” which Dolly recorded with me not long after she moved to town in 1964. The other, and the one I am so incredibly excited about, is the song you might have heard me sing on the Grand Ole Opry and/or Larry’s Country Diner called, “Someday It’ll All Make Sense.”
You may have heard me sing it, but you’ve really not heard the song until you hear it with Dolly’s voice added to the mix. The few people who have heard it say that it reminds them of the old Porter & Dolly duets, and that’s just about the best compliment our record could be paid. It’s stone country, and I think you’ll be surprised at how well our voices blend. Plus, the positive message of the song makes it one of the favorite records of my entire career. I can’t wait for you to hear it.
Oh, and did I mention that Dolly and I are set to film a video together in a couple of weeks? It’ll be a tough job, but somebody’s got to do it!
In the meantime there’s a lot of other things going on. On May 3rd I am recording a TV visit with my friend, Clint Black, for his new show on the Circle Network. When they give us an air date I’ll let you know. Jeannie Seely and I are also taking part in the filming of a documentary tribute to the late Minnie Pearl that same day. Somewhere between May 23rd and May 29th the interview I did with Jimmy Fortune for his new show will air on seven different networks across the country. You can check it out at www.mylifemysongs.com by clicking on “Shows.”
My Sirius/XM radio buddy, Dallas Wayne, has invited me to join him on May 7th to perform his new song, “He Even Brought Her Flowers,” for the first time on the Opry. And on May 14th I’ll be joining the Opry cast and management in officially inducting my longtime friend, Jamey Johnson, into the Opry family. I’ll be on the Opry two more times in May as well, the 28th and the 31st.
I had a great honor bestowed on me a few days ago when the Atlanta Braves’ 2021 World Series championship trophy made an appearance in Nashville, and they asked me to be the one to present it to the fans down at the Hall of Fame. Me and a whole bunch of my fellow Braves fans did the “Chop” and laughed and relived a lot of great memories from last season. I even got to try on a World Series ring…and it made my treasured Grand Ole Opry ring look mighty small in comparison.
People are starting to ask if I’m going to take part in any CMA Music Fest activities this year, and the answer is yes. I’ll have the details in our June newsletter.
On the personal side, my grandson Gabe had pain management surgery (injections) in late April to try and ease the pain from the arthritis with which he has been diagnosed. It seems like it’s one thing after another for him, and we continue to thank you for your thoughts and prayers on his behalf. Just don’t stop now.
Here’s wishing each of you a merry, merry month of May, and we’ll see you back here in early June. Thanks for everything….

BILL ANDERSON TO RELEASE NEW ALBUM As Far As I Can See: The Best Of on June 10

1) Numerous original music artists like George Jones, Merle Haggard, Johnny Cash, Elvis Presley, and others have been impersonated by various individuals. To my knowledge, I have never heard anyone impersonating the one and only Whisperin’ Bill Anderson. Is is because there is no one except you who has that unique singing voice?
Back in the day, you used to have to stand in line if you wanted to impersonate Bill Anderson. Loretta Lynn did it. Ferlin Husky did it, as did others like Billy “Crash” Craddock and Del Reeves. People used to think it bothered me, but I considered it a compliment. As Ferlin told me one time, “If you weren’t different, there wouldn’t be anything to imitate.” I haven’t heard of any of today’s young artists impersonating me, but maybe one will come along someday. I hope so. That way I can be in two places at once!
2) With the sad news that the E.T. Record Shop is closing do you plan on updating “Gone Away?” Also the passing of Bobbie Nelson and Naomi Judd.
Sadly, I could update the song, “Gone Away,” almost every day. So many things are changing and so many of our music business friends are passing away….including Steve Ripley who wrote the melody and the original lyrics to “Gone Away.” We all know nothing stays the same forever, but it would be nice if some of the changes would at least slow down for awhile. Meantime, I don’t have any plans to try and update the song.
3) Did you ever write a song for the late and great Webb Pierce? He was the first country singer I heard when I was 12-years old, and I’ve been hooked on traditional country music ever since.
Webb was an over-the-top performer and a great song stylist, and I would love to tell you that I wrote one or more of his big hits, but unfortunately, I didn’t. I think he may have covered a couple of my songs….maybe “Once A Day” or “I Don’t Love You Anymore”….in one or more of his albums, but we never had a single together. I wish we had, but Mel Tillis was always in line ahead of me!
4) Our Question Of The Month comes from John in California: When you sang the song, “Bright Lights and Country Music” later in life, I noticed you changed up the part about a bottle filled with wine. Was this because of your faith? And what caused you to later sing it as it was originally written?
We singers often wonder if listeners pay attention to the lyrics of our songs when we are singing them, but this question proves that at least some of you do. And I’m glad. I have a good answer as to why I changed the lyrics to begin with, but probably a not-so-good answer as to why I went back to the original version. My wife was nearly killed and was permanently impaired by a drunk driver who crashed head-on into her car late one night back in 1984. I swore at that time that I would never sing another song that glorified drinking, and for years I didn’t. Some time ago, after more than thirty years had passed, a fan wrote me and said they really missed their favorite line in that song – “Honkytonks were made for men with women on their mind” – and asked me if I would go back to singing it that way. I did it on the Opry not long afterward and, truthfully, you are the first person to mention it. I figured if nobody cared enough to bring it up, I’d just leave well enough alone. Do any of our readers have thoughts on the subject??
Quickies: Were you ever in the movies? Yes. And the popcorn was delicious. Oh, you mean was I ever IN a movie? Back in the 60’s I was in four or five Grade B country music films that were shown in the better drive-in theaters from coast-to-coast, but I was never featured as an actor or anything like that. Mostly I think the producers just wanted to show my fancy rhinestone Nudie suits in color on a big screen. Do you know if any artist ever buys their albums back from fans? I’ve never heard of anyone doing that, but I’m not like Hank Snow. I haven’t been everywhere. Do you have a boot endorsement and would you wear square toe boots? How many pair do you keep at home? Yes, I endorse boots made by the Easterling Boot Company in Fredericksburg, Texas. We experimented with a couple of square-toe models a few years ago, and they are pretty comfortable. I just looked in my closet and there were 16 pairs (or is it “pair?”) staring back at me. Keep in mind, though, that several of my favorite ones are on display right now at the Country Music Hall of Fame. Who arranges the order of songs in your concert shows? I do. Will you be having any concert dates during 2022? Right now there are none on my schedule.
Thanks for your questions…I love trying to answer them. If you’re curious about something connected to me or to country music, send your question to askbill@billanderson.com and I’ll do my best to reply. And remember, the person who submits the Question of the Month wins any item of their choice from our online store absolutely free. See you back here in June.

“UMG Records wanted my upcoming album to have a “retro” look, so they found this old picture from somewhere back in the sixties to use on the cover. They also wanted the record to tie-in with my current display at the Country Music Hall of Fame, so they titled it after the exhibit, “As Far As I Can See.” Thanks to all of you who pre-ordered copies and made it the #1 most pre-ordered record on Amazon the week it was announced. The official release date is June 10th.The second picture here shows how happy I was to be standing next to the Atlanta Braves 2021 World Series trophy when it was unveiled in Nashville April 26th. I even got a text message from the Braves’ manager, Brian Snitker, saying that he thought I looked good with the trophy. I told him he looked a lot better with it when they won it! I didn’t get to wish Loretta Lynn a Happy 90th Birthday back on April 14th, but better late than never. This picture was taken the last time we were on the Opry together several years ago. What a great lady…and here’s wishing her many more happy birthdays.” 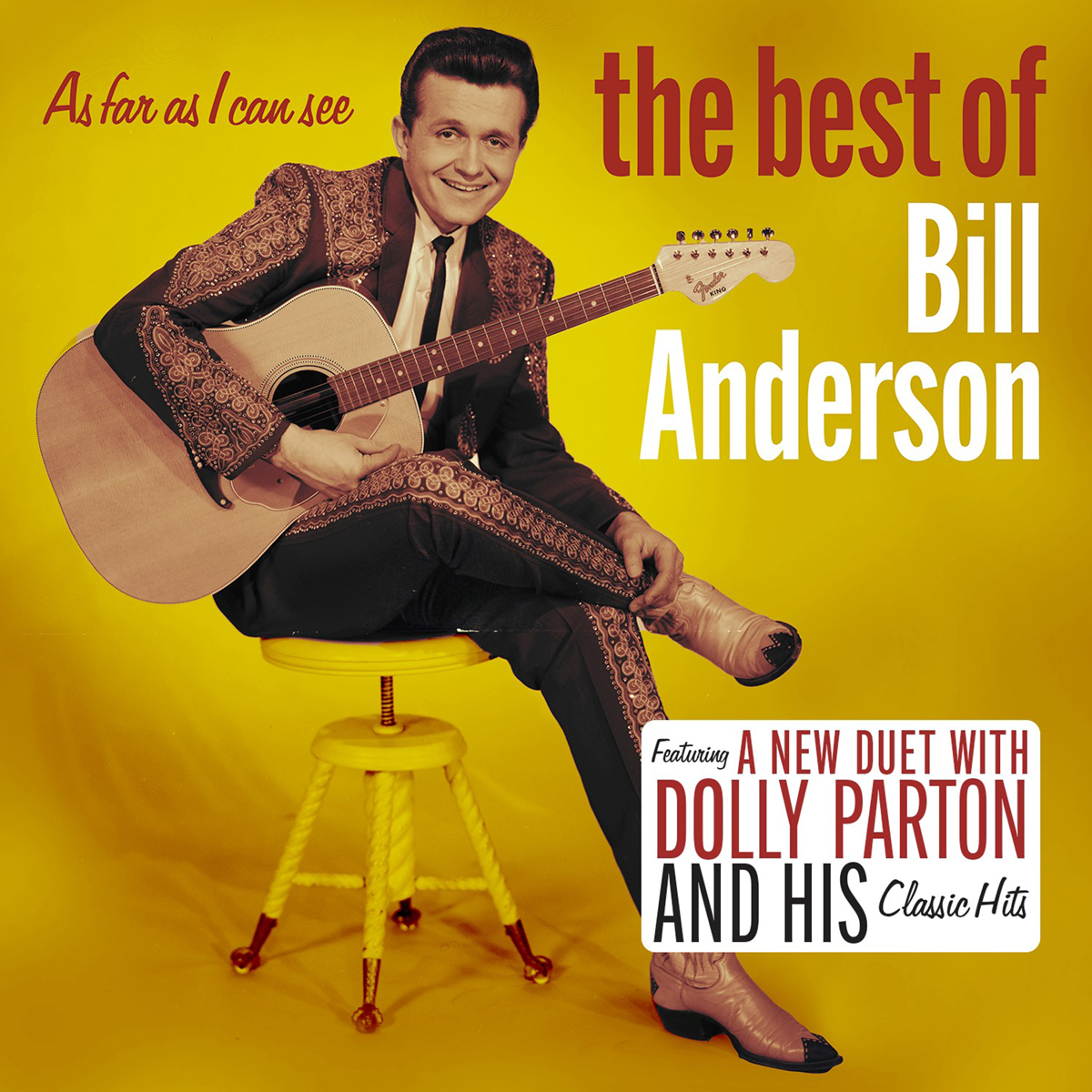 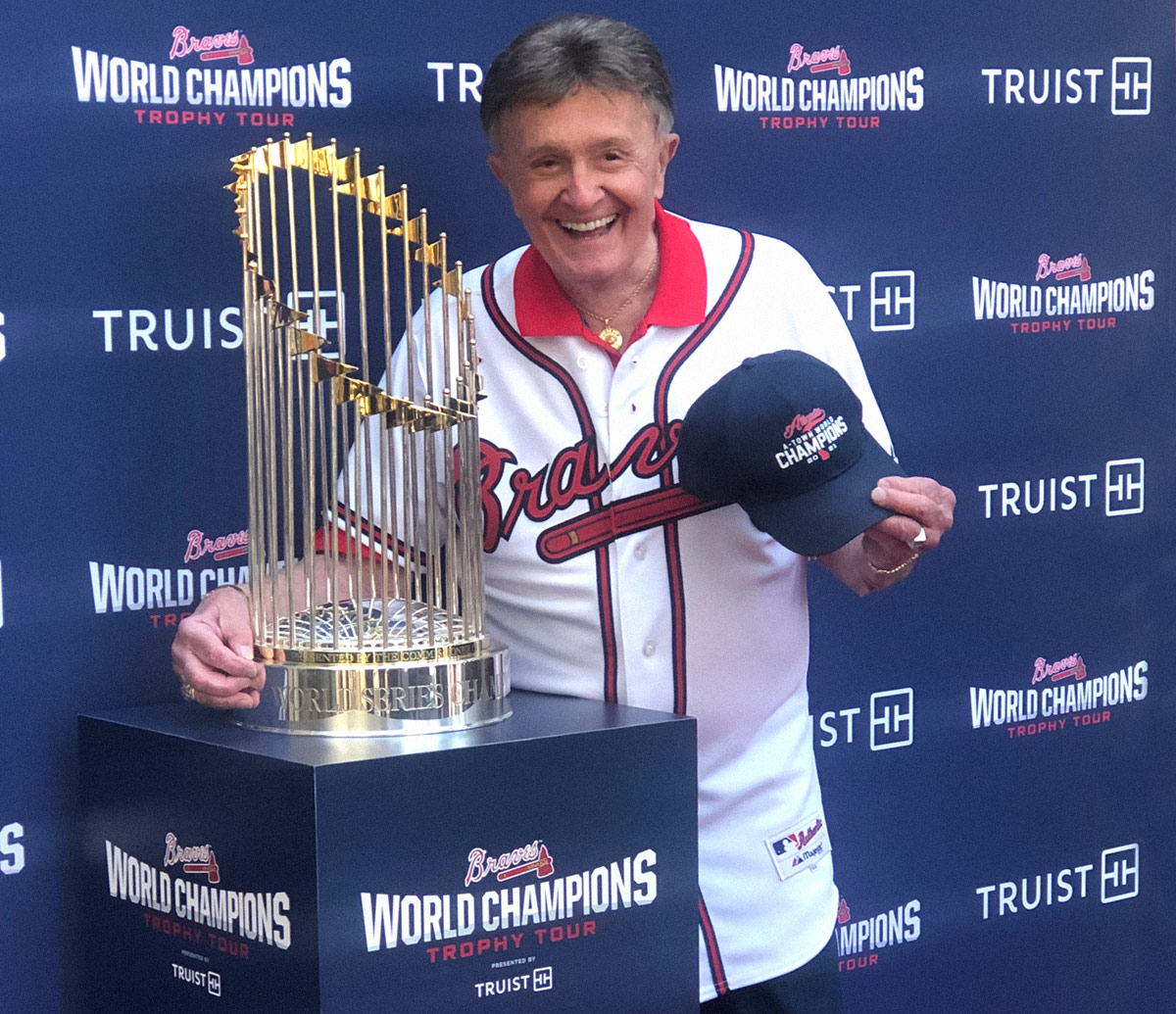 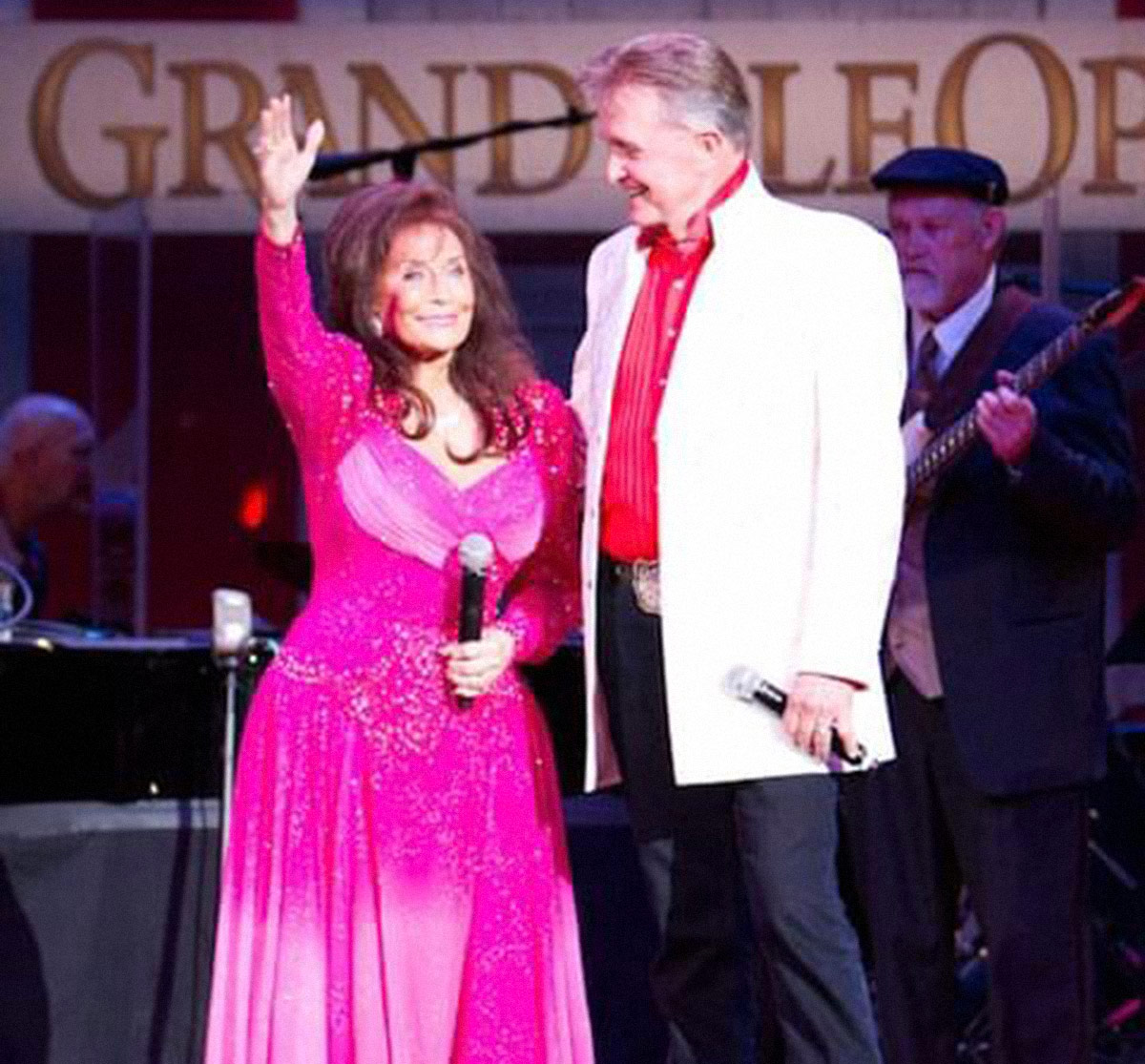