I was standing barefoot in my kitchen last Thursday morning shortly after 10:30 when my phone rang. I didn’t recognize the number, so I let it go to voice mail.

I was in the midst of enjoying a lazy morning. I hadn’t combed my hair, gotten dressed, or even eaten breakfast. I had a doctor’s appointment scheduled for 2:30 in the afternoon, but figured I would just kick back until it was time to get ready for that.

My phone beeped, and I knew whoever called had left a message. I punched in my code and heard a familiar voice.

“Bill, this is Kyle Young down at the Hall of Fame. Would you call me as soon as you get this? I need to speak with you. It’s important.” I immediately got him on the phone.

“Did you get my letter last week telling you that Jim Ed Brown and The Browns have requested that you be the one to induct them into the Hall of Fame in October?” he asked. I assured him that I had, and that I considered it an honor and a privilege to have been asked.

“Well, as you probably know, Jim Ed is not doing well at all. His cancer has come back, and the doctors have told us he might not make it through the weekend. We want to go out to the hospital at one o’clock today and present him with his Hall of Fame Medallion. Can you go?”

I was stunned. I looked at the clock. I knew I’d have to shave, shower, get dressed, and drive about 45-minutes to the hospital. I’d be cutting it close, but, yes, I said I could be there. I knew if the situation were reversed, Jim Ed would be there for me.

I also knew how much their having been voted membership in the Hall of Fame meant to Jim Ed and to his sisters, Maxine and Bonnie. It had been a long time coming, and they had almost given up hope. I had already been looking forward to seeing the expression on Jim Ed’s face when I put that Medallion around his neck. I just never imagined it would be in June or that he would be in a hospital bed.

There weren’t more than fifteen people in the room. Jim Ed’s wife, Becky; his daughter, Kim; Pete Fisher from the Opry, Sarah Trahern, Executive Director of the Country Music Association; Kyle Young and some of his staff from the Hall; Kirt Webster, Jim Ed’s publicist; Lee Willard, my manager; a few close friends, a couple of nurses, and me. Nobody had told J. E. that we were coming, and he was totally shocked when we all walked in.

Kyle told him why we were there, and in keeping with tradition, he read aloud a short biography of The Browns. Then he read another bio of Jim Ed, highlighting the fact that he had enjoyed three different careers in his lifetime….as one-third of The Browns, as a duet partner with Helen Cornelius, and as a solo act on his own. Kyle reminded us of hit records like “The Three Bells,” “I Don’t Want To Have To Marry You,” and “Pop-A-Top.” He told of Jim Ed entering a talent contest as a youngster and losing out to a harmonica player. Everybody laughed.

Then he turned to me and handed me Jim Ed’s Medallion, the official emblem certifying Hall of Fame membership. I leaned in close and reminded Jim Ed that one Hall of Fame member always inducts another, and how honored I was that he and his sisters had chosen me to do the induction for them.

Jim Ed sat up a little straighter in the bed and removed the ball cap that he had been wearing. I said in a halting voice: “Jim Ed, on behalf of the membership of the Country Music Association, it’s my pleasure and privilege to welcome Jim Ed Brown and The Browns to your rightful place in the Country Music Hall Of Fame.” I slipped the ribbon over his head and watched as he proudly lay the Medallion itself on his chest. There was not a dry eye in the room.

He thanked everybody in his very weak voice and said again what a thrill it was. “I had almost decided this was never going to happen, and I told myself it was all right. I had had a pretty good run. But this means more to me than you’ll ever know.”

I don’t know what made me do it, but suddenly I started singing, “Will The Circle Be Unbroken” there at the head of his bed. Everyone in the room joined in, just as we do on Medallion Night at the Hall of Fame each year. Jim Ed was even mouthing the words. It was sad, but somehow it seemed fitting.

As the people began to say their goodbyes and drift out of the room, Jim Ed told Kirt Webster he wanted to ask me a question. I walked back to his side.

“Do you think I’ll be able to sing again when I get to heaven?” he asked weakly. “Because I sure can’t sing now.”

I was taken back by his question. I thought a minute and said, “Well, Jim Ed, if you can’t sing, just send word to me and I’ll loan you my ‘whisper’!” He smiled.

And then I added, “But you’ll have to watch Dickens. He’ll try to drown you out.”

I think the thought of seeing his old friend again stirred something special inside Jim Ed. He looked up at me and broke into a grin. Then the grin turned into a chuckle. And then the chuckle turned into a belly laugh. He finally got to laughing so hard that tears were running down his cheeks. He said, ” ‘Tater would do that, wouldn’t he?” I nodded, and he reached for my arm. I squeezed his hand, told him I loved him, and I turned away.

I wanted to remember him laughing. 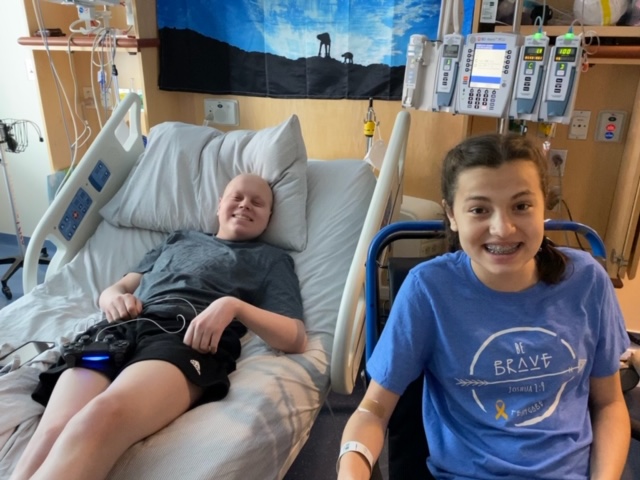