“How sweet it was to come down the straightaway on Briley Parkway the night of October 17th  and see the big illuminated sign saying that Bill Anderson would be performing that night on the Grand Ole Opry! It had been seven months since I had walked out on that world-famous stage, and I couldn’t wait to get back. The night turned out to be everything I had hoped for. So did the night of my birthday a little over two weeks later. I celebrated outdoors at home with my three children (L. to R.) Jamey, Jenni, and Terri. My granddaughter, Sophie, has a November 5th birthday, and it’s been our tradition over the years to celebrate our big days together. This year we each had a cupcake with a single candle. It’s hard to believe she turned eleven years old and that she has been part of our family for almost ten of those amazing years. Having the chance to spend my birthday with the ones I love the most is a truly special gift. As I’ve said many times, I…among men…am most richly blessed.” 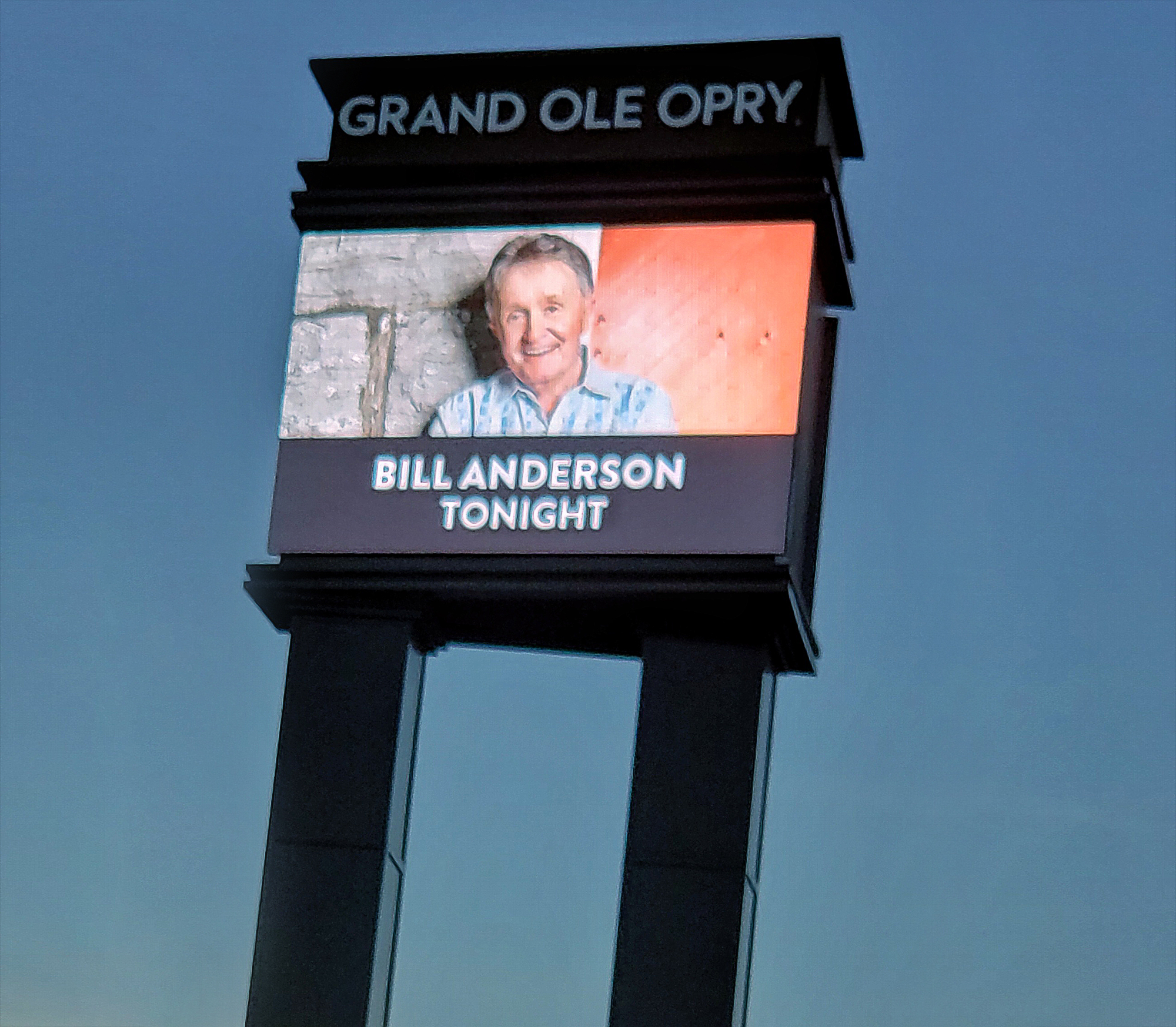 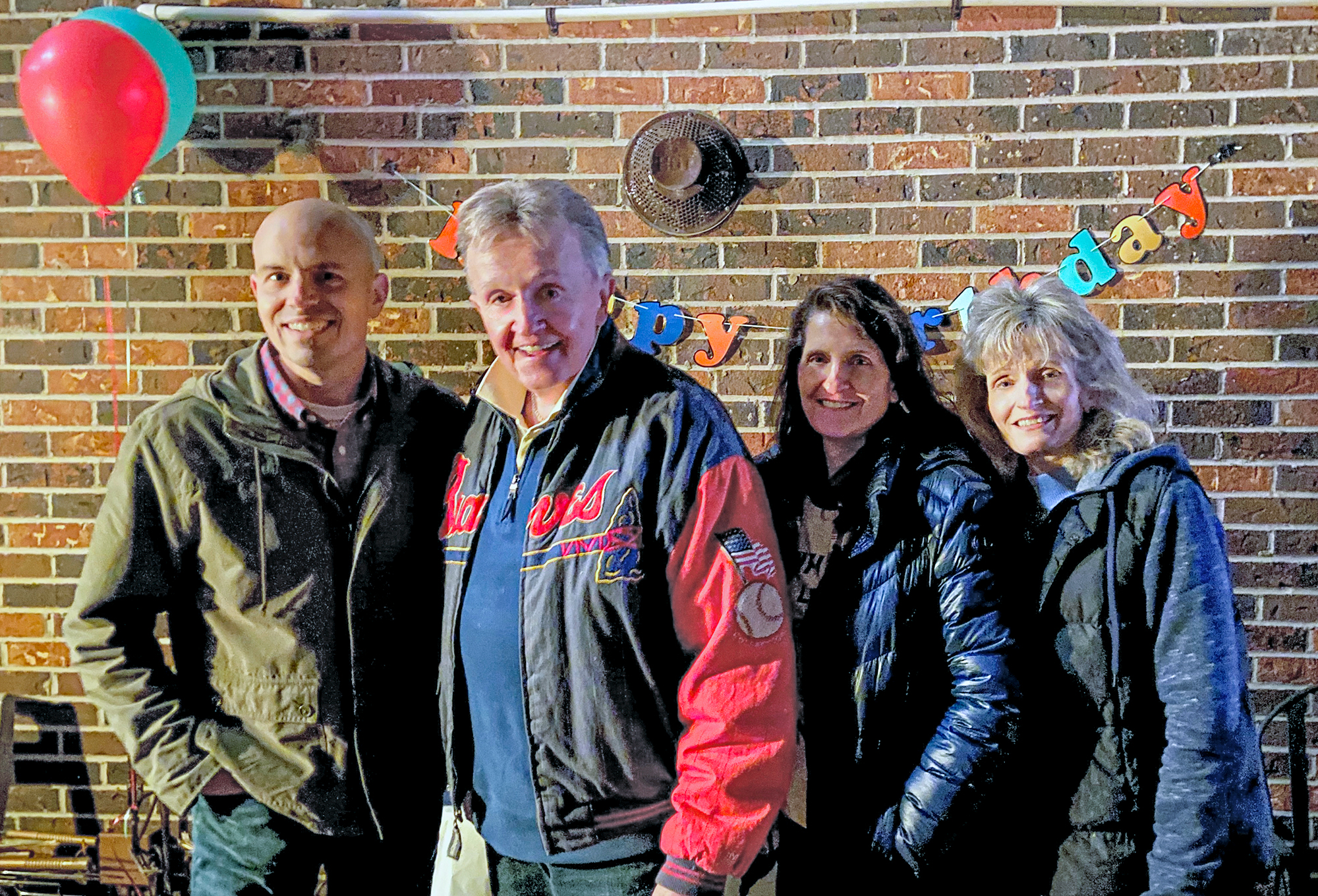 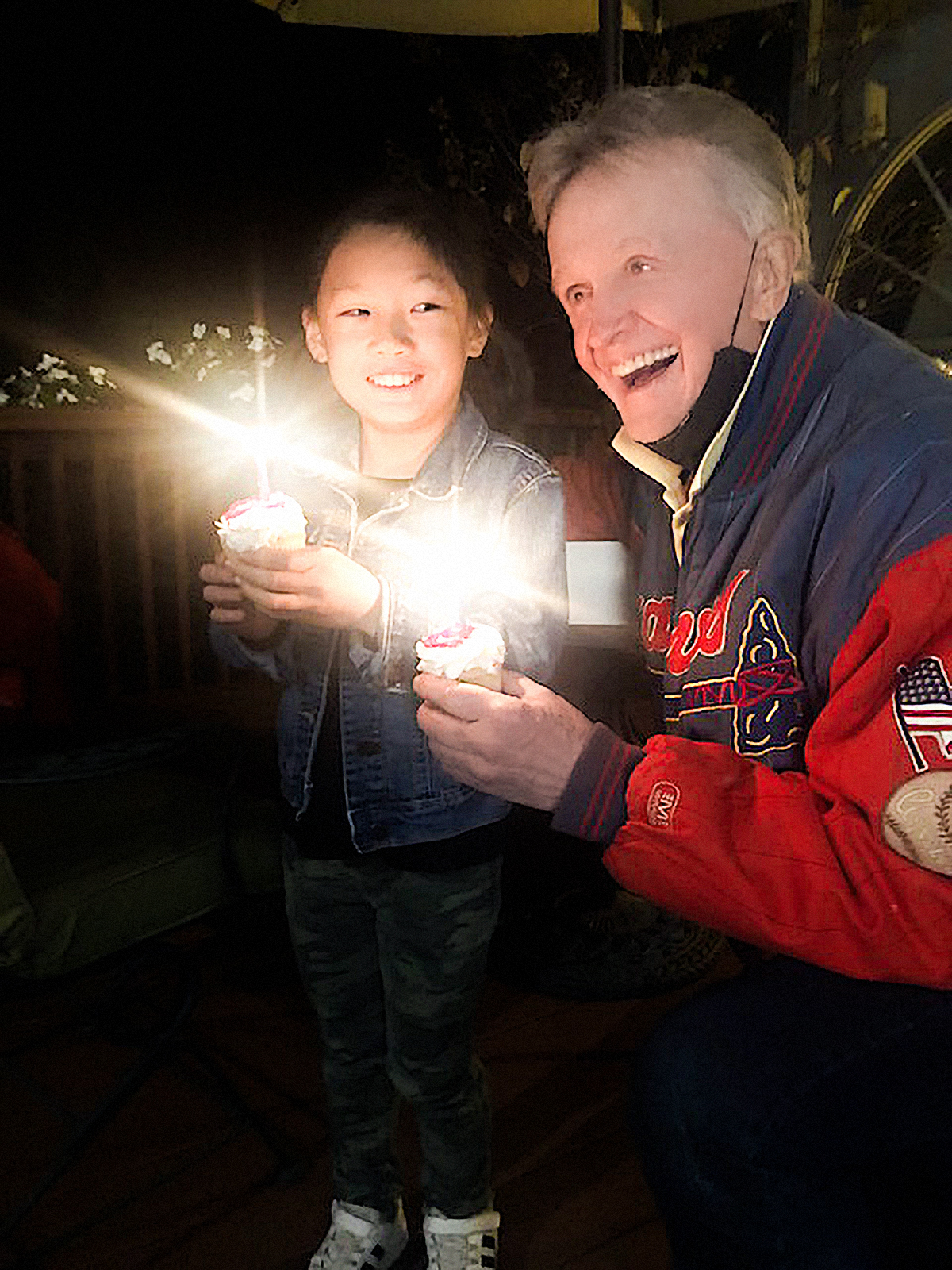 “My grandson, Blake, and I were all smiles after his team’s victory in the regional high school basketball tournament recently. He sure makes me look short, doesn’t he? Of course, a lot of his height comes from his hair which his mother keeps begging him to cut. Like many athletes, though, Blake is superstitious, and he said that as long as his team was winning and he was playing well, he wasn’t going to cut his hair. You can really see how long it’s grown in the middle picture where he’s fighting to keep the ball out of his opponents’ hands. In the last picture, Lance Miller, Bobby Tomberlin, and I looked like we’re out to rob a bank, but we’re just masked-up and hanging out at a songwriting session. It had been a year since the three of us had written together, and it sure was fun. Hopefully, you’ll hear the song we created one of these days. Lance and Bobby are two of my favorite people to write and spend time with.” 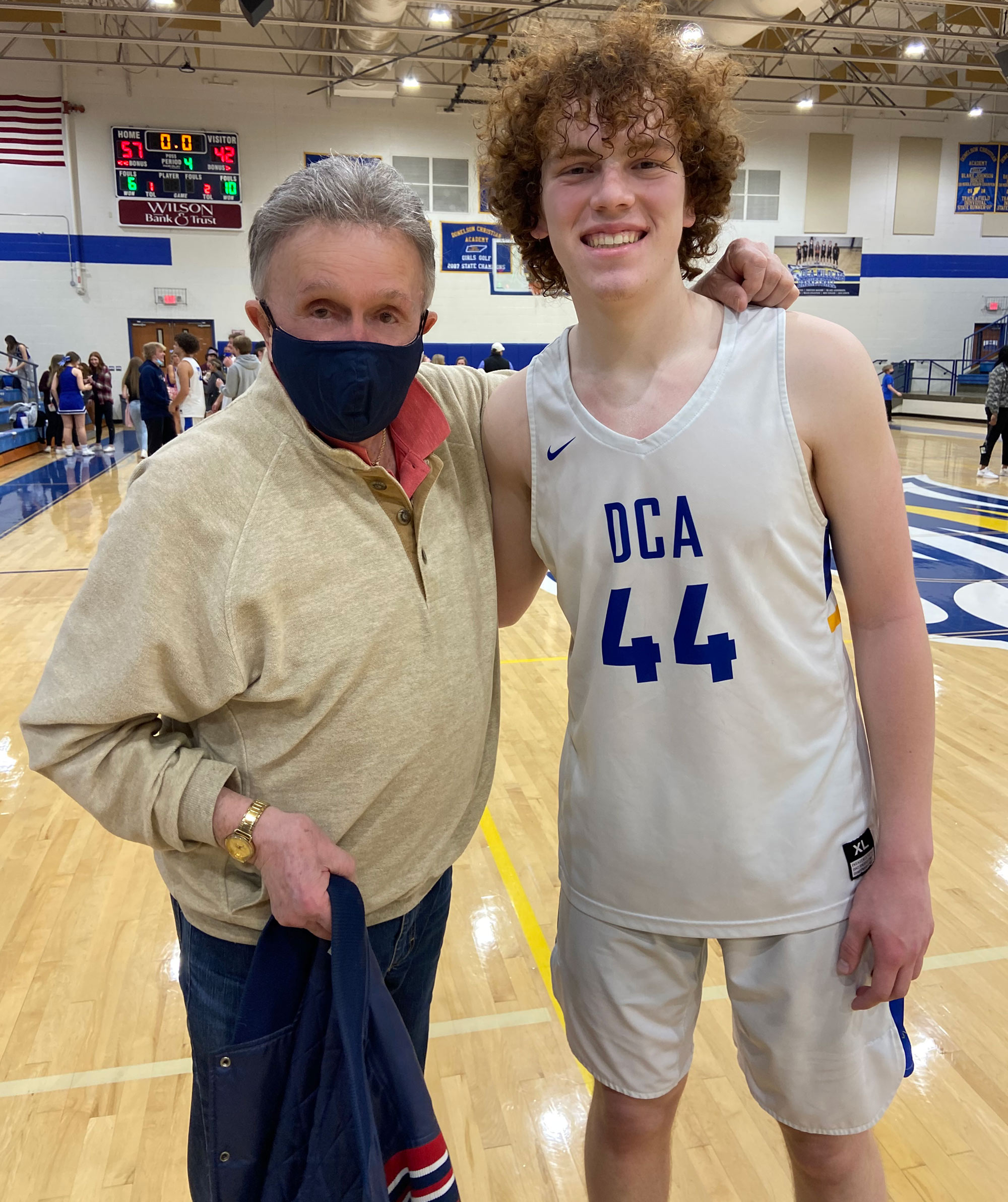 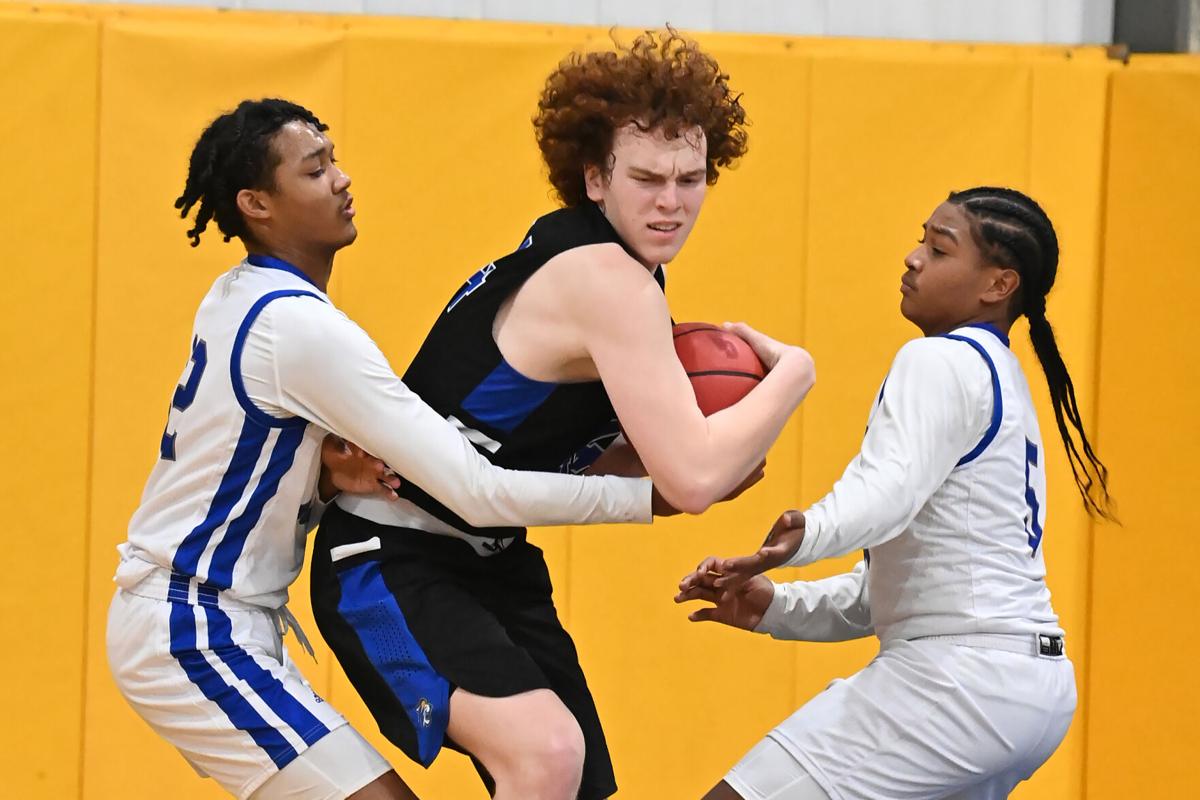 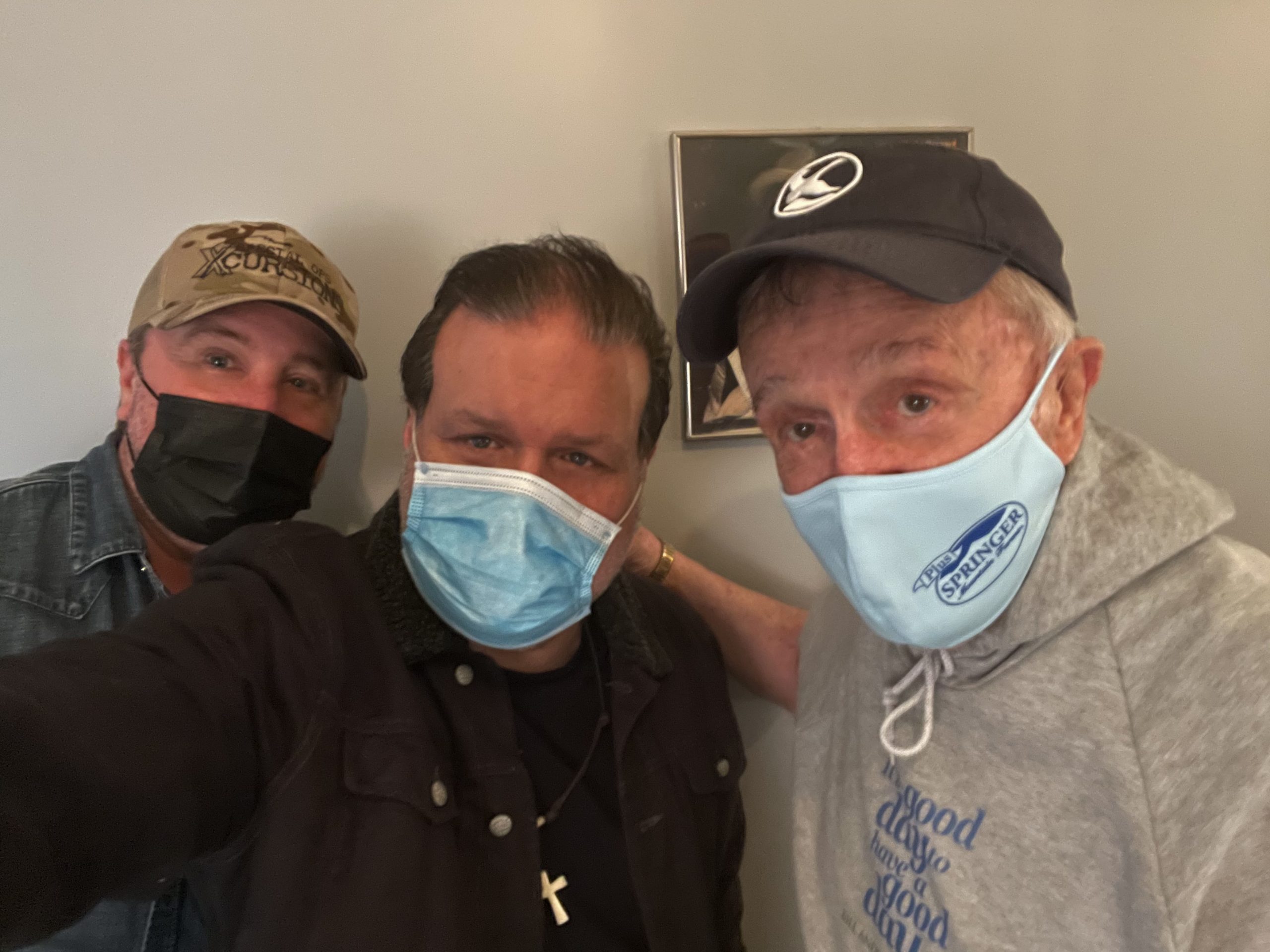 “If you watch Larry’s Country Diner on TV, I’m sure you recognize the man with me in the first picture. He’s Gus Arrendale, president of Springer Mountain Farms chicken, and one of the best friends country music ever had. Gus has done so many wonderful things for so many of us that we decided to show up on his birthday and surprise him with a luncheon and a special CD we made in his honor. Gus is a big Georgia football fan, so I wore my Bulldog mask especially for him. The next picture was taken a few years ago on the night baseball Hall of Fame pitcher, Don Sutton, came to the Grand Ole Opry as my guest. We talked country music and baseball into the late night hours. Sadly, Don passed away last month at the age of 75. I ran across the final picture recently and was reminded of the day many years ago when Ray Price and I shared the stage at the Georgia Jubilee in East Point, Georgia. The audience got a double-dose of rhinestone suits and “City Lights” that day as we both sang our hit song.” 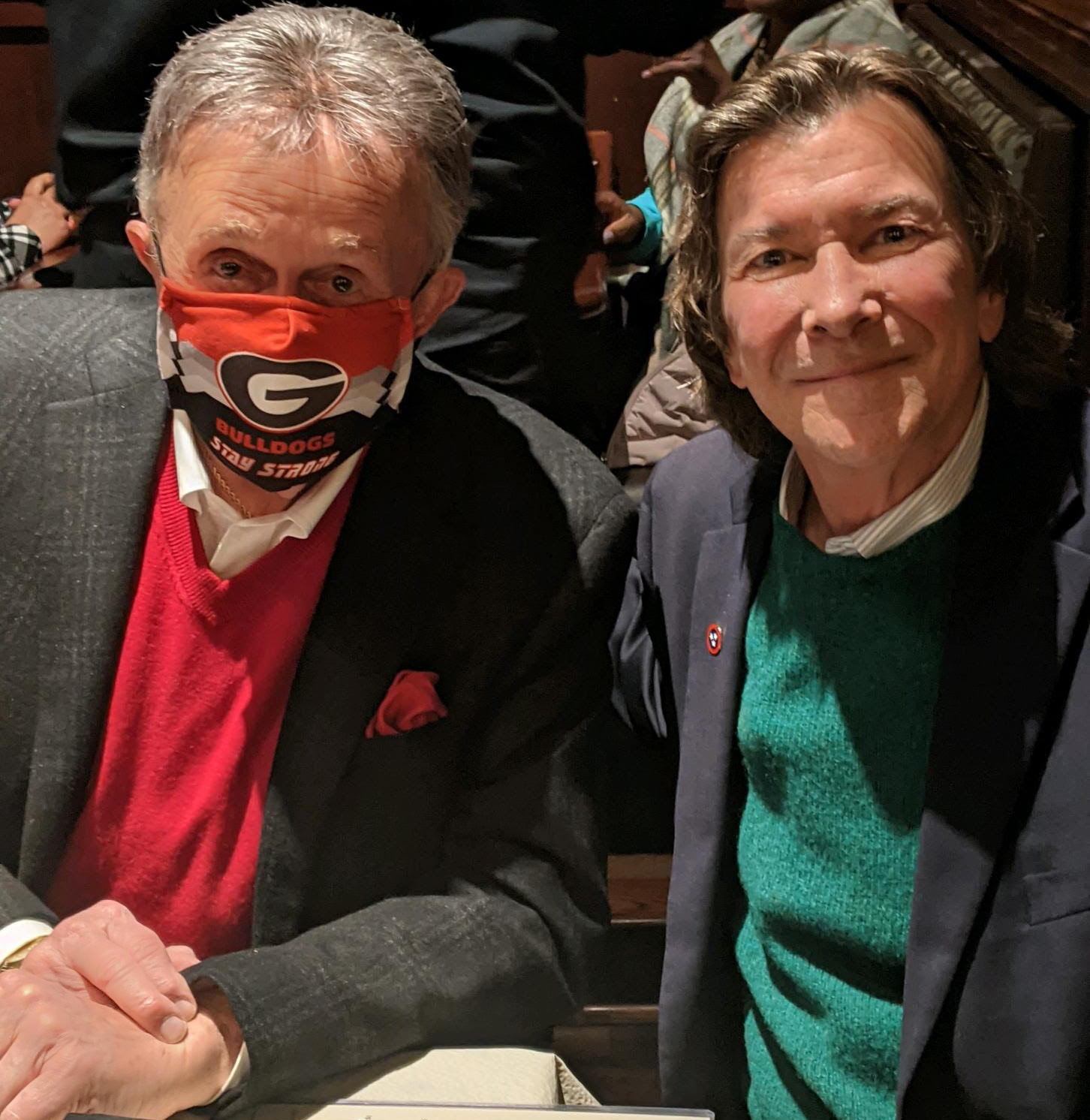 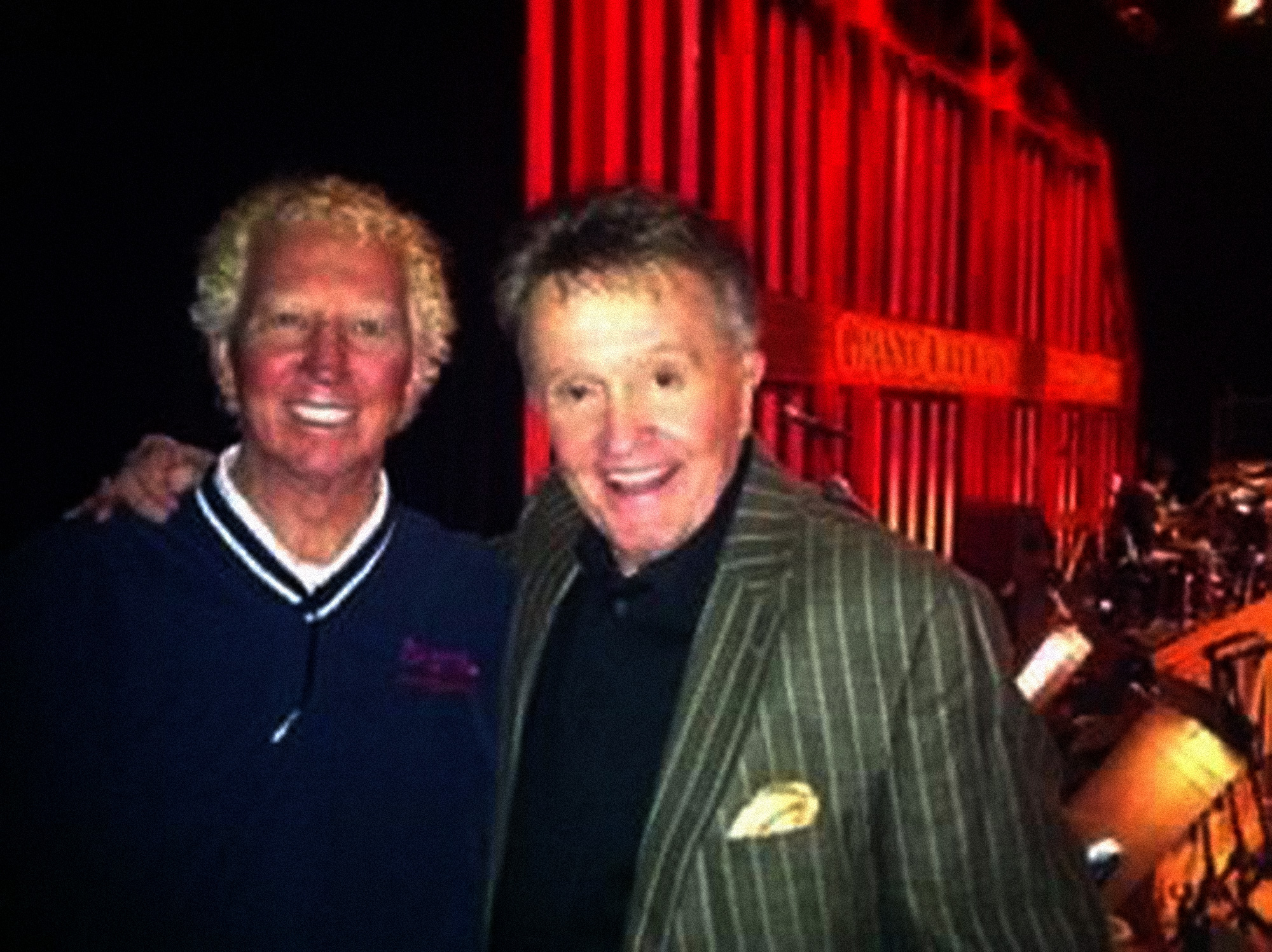 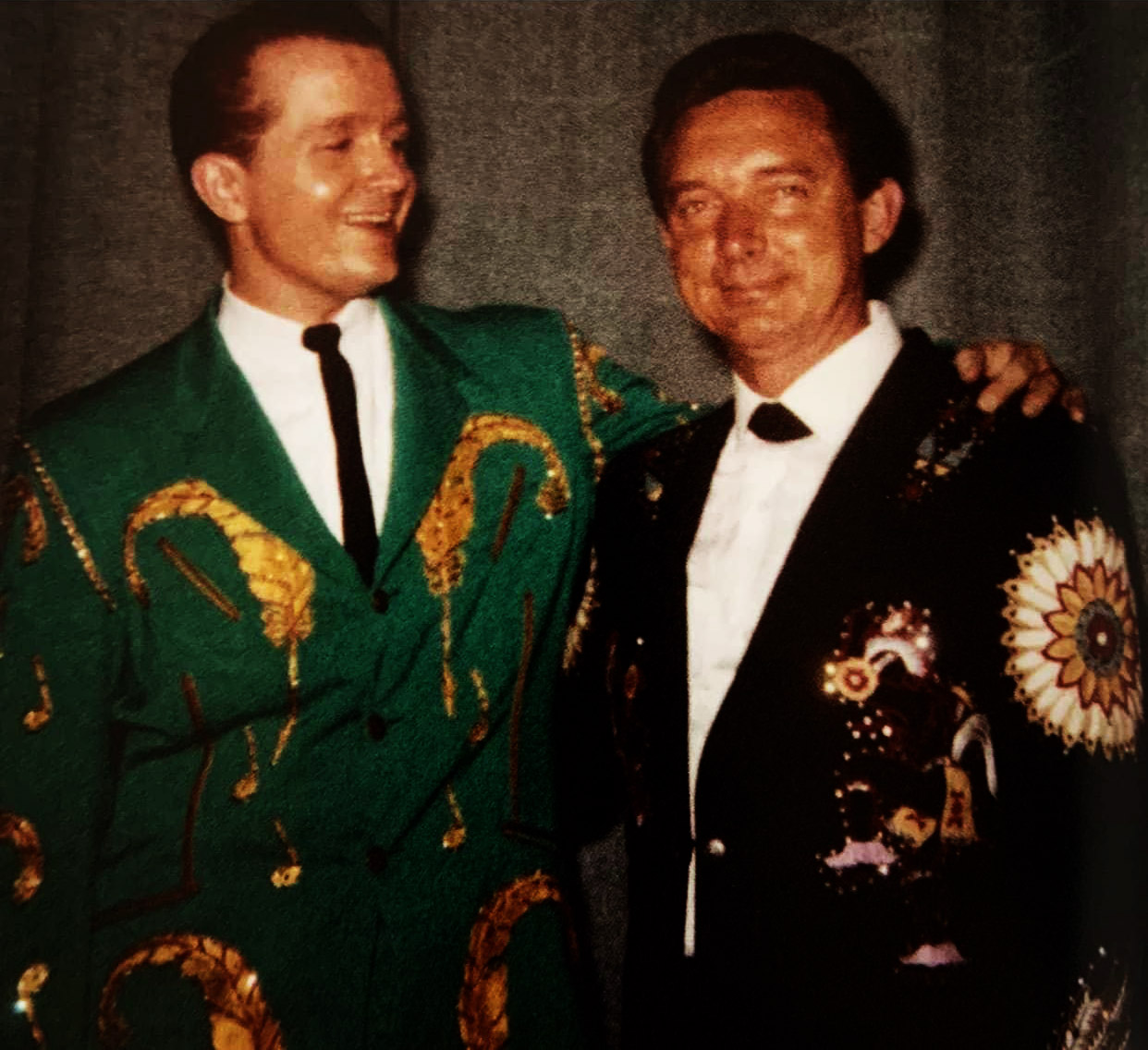 You can’t see the smile behind my mask, but believe me there was a big ol’ grin on my face when my grandkids presented me with the picture I’m holding a few days before Christmas. It was the first time they had all gotten together for a picture in eight years, and it’s a great shot of all eight of them. I treasure it. And I treasure the memories of Jan Howard and Charley Pride, both of whom we lost last year. This picture of the three of us was taken backstage at the Opry in 2012. The bottom picture shows the bass player in our Po’ Folks Band, James Freeze, modeling his “Good Day To Have A Good Day” t-shirt. If you haven’t added one of our “Good Day” items to your collection, I invite you to check them all out in the SHOP section of our website. Thanks…and have a “good day!” 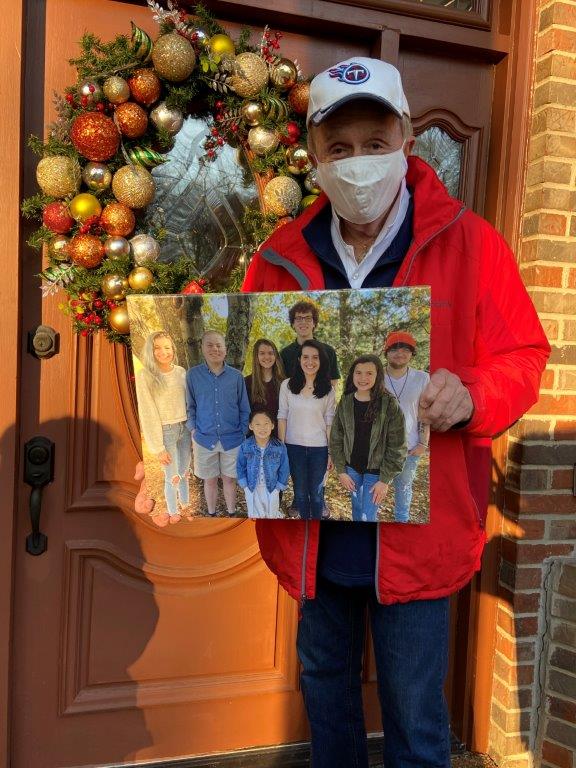 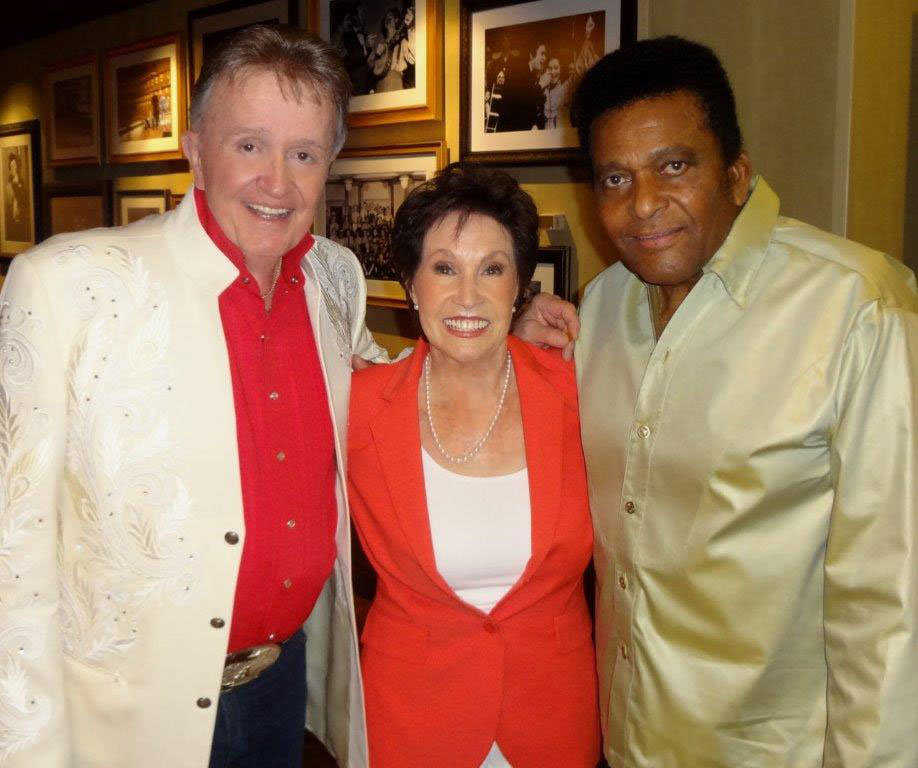 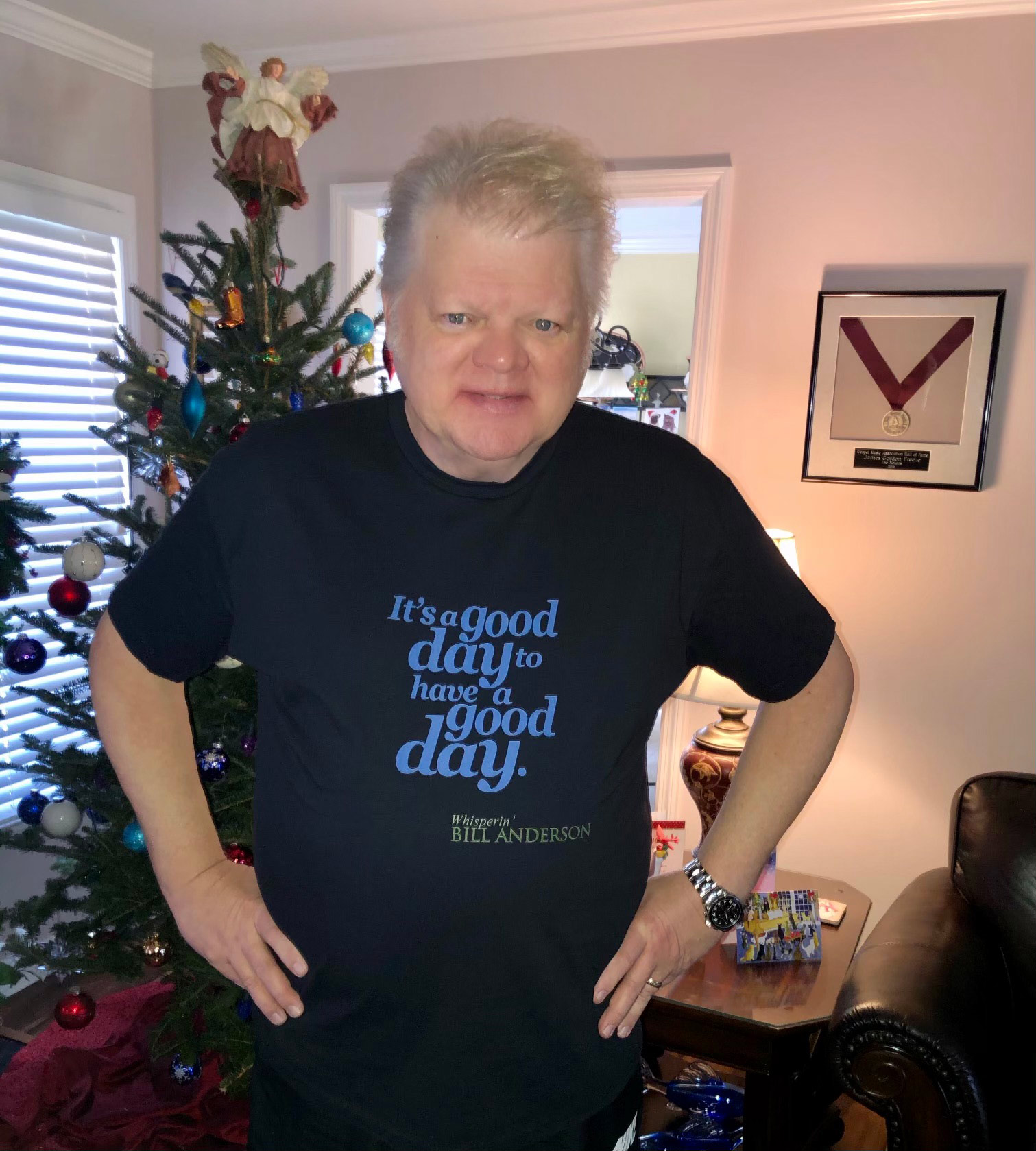